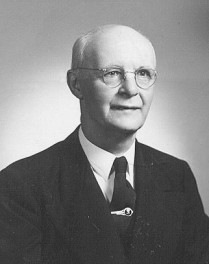 Born in Winsum, Friesland, the Netherlands in 1881, Samuel Volbeda emigrated to Allendale, Michigan in 1886 with his widowed mother and three sisters. He graduated from Calvin Theological Seminary in 1904 and pastored two congregations before studying at the Free University at Amsterdam, from which he received a D.D. in 1914. He was appointed to Calvin Seminary faculty as professor of Church History, 1914-26, and of Practical Theology, 1926-1952.

A gifted and eloquent preacher, who was skilled at public prayer in both Dutch and English, Volbeda was also a biblical scholar. He oversaw growing enrollment at the seminary, particularly during the post World War II years. He opposed suggestions to use higher academic requirements to limit enrollment, arguing that academic achievements do not necessarily make for successful pastors. Due to failing health, Volbeda's tenure as president ended in 1952 as dissention split the seven member faculty.

In 1904 Volbeda married Alice Gronedyke (1882-1945). They had three children: Cornelius, Anna Venhuizen, and Frederick. In 1948 he married Trena Mejeur of Kalamazoo, Michigan.