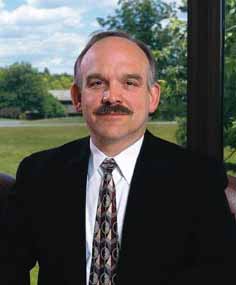 Born In Iowa, Gaylen James Byker was raised in Hudsonville, Michigan, and served in the U.S. Army, 1967-70, seeing action in Vietnam. Following military service, he attended Calvin College graduating in 1973. His graduate education includes a M.A. and J.D. in World Politics from University of Michigan, and a Ph.D. from University of Pennsylvania. Prior to accepting the appointment as president, he worked in the fields of international banking and energy.

During Byker's tenure as president new construction on the campus continued. During the summer of 1998, work began on the Life Science Building, to house the departments of chemistry and biology, and the West Michigan Regional Laboratory (ajoint venture with Spectrum Health of Grand Rapids). In addition, the Richard and Helen DeVos Foundation made a significant contribution toward the construction of a DeVos Communication Center, as did the Edgar and Elsa Prince Foundation to the Prince Conference Center. Also completed was the Spoelhof Fieldhouse Complex, which includes the Huizenga Tennis and Track Center, the Venema Aquatic Center, the Van Noord Arena and Fitness Center, and the Hoogenboom Health and Recreation Center; as well as the renovation and expansion of the Covenant Fine Arts Center.

Susan Lemmen and Byker married in 1970. They have two daughters Tanya and Gayle. For more information see A Brief Biography.