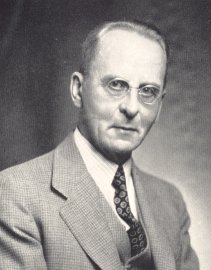 The son of Geert Broene and Andina Harmsen, Johannes Broene was born in Muskegon, Michigan. His father was ordained in 1877 and the young Broene grew up in various Christian Reformed parsonages. After attending the University of Michigan, he graduated from Valparaiso University in 1906, he received an M.A. in 1908 from Clark University. He continued to pursue his Ph.D. at Clark, while working as a teacher and later principal of Christian schools in Paterson, NJ and Chicago, IL.

He joined the Calvin College staff in 1908 teaching primarily in Philosophy and Education but also classes in History, Civics, Government, Chemistry, and Psychology. In 1925 he was asked to serve one year as the interim president. He did not feel called to the office, but reluctantly accepted the appointment. He was re-appointed the next year and in 1928 was appointed as acting-president.

During his term, the school saw a modest increase in enrollment and received accreditation from the North Central Association of Colleges and Secondary Schools. He was particularly adept at finding a middle ground when the Board and faculty disagreed over administrative issues. A dedicated and effective scholar and teacher, Broene never felt comfortable with the administrative and fund-raising duties attached to the office of president and repeatedly asked to be released from the appointment. The Board of Trustees complied at the end of 1929 but in 1940 again asked him to serve as an interim president. Broene accepted only after it was clearly understood that the appointment would be limited to one year.

He officially retired from Calvin College in 1945, but continued teaching until 1951. He was married to Josie Kleinhuizen (1893-1963); they had no children.