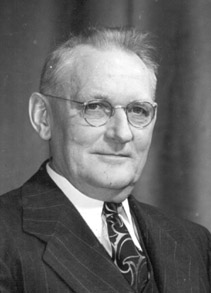 Born in Chicago, Illinois, Ralph Stob felt called to the ministry and enrolled in the preparatory curriculum of Calvin College in 1909. He graduated in 1915 and enrolled in the Seminary. When Professor Muyskens left Calvin College in 1917, Stob accepted an appointment to teach classical languages at his alma mater. Teaching delayed his seminary graduation until1920. He continued to teach at Calvin while working during the summers on his A.M. (1928) and Ph.D. (1930) degrees at the University of Chicago.

A gifted and amiable teacher, Stob was appointed president in 1933 with a mandate to take charge of the school with a firm hand. He oversaw improvements to the curriculum and the beginning of a pension program for the staff. While enrollment increased 27 percent during his six years as president, the economic difficulties resulting from the Great Depression only allowed the number of faculty to increase from 21 to 22. Faculty criticism about his administrative style, well publicized student pranks, student criticism in the Chimes, and student flaunting of school rules made for a difficult presidency. In 1939, Stob asked not to be re-appointed, returning to teaching Greek as effectively as before.

In 1953 Synod asked Stob to assume the Chair of New Testament in the seminary and he was admitted to the ministry via a colloquium doctum in 1954. He retired from the seminary in 1964 and died the following year.