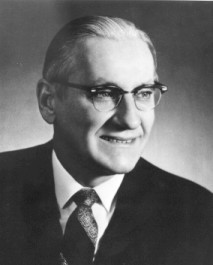 A native of Paterson, New Jersey, Spoelhof graduated from Calvin College in 1931 and began teaching history and civics at the secondary level. He received his M.A. from the University of Michigan in 1937, and began his doctoral studies there. During W.W.II he enlisted in the U.S. Navy and served in the Office of Strategic Services. After the war he completed his doctoral work and came to Calvin to teach history and political science in 1946.

The post W.W.II enrollment increases continued during Spoelhof's presidency, from 1,170 in 1951 to 3,970 in 1976. To deal with the steady growth, in 1953 a commons building was dedicated on the Franklin campus. Within a few years the continuing growth required further expansion, which was difficult at the Franklin site since urban development surrounded the campus. In 1956 the Knollcrest farm was purchased for $400,000, and Spoelhof oversaw the gradual process of moving the school to the new site. The construction required extensive fund raising. The seminary move to Knollcrest began in 1960 and the college completed this transfer in 1973. Toward the end of the 1960s Spoelhof also had to deal with the impact of nation-wide student protest movements on the Calvin campus.

As the school prepared to celebrate its centennial in 1976, Spoelhof announced his retirement as the longest serving president to date. After retiring, he worked briefly for the United States Information Agency. In 1935 Spoelhof and Angeline Nydam (1909-1994) married. They had three children, Robert Spoelhof, Elsa Scherphorn, and Peter Spoelhof.