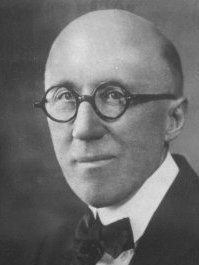 Born on the family farm near Niekerk, Michigan, west of present-day Holland, Albertus John Rooks attended country schools and the academy at Hope College from age 13 to 19. He left Hope to teach in country schools near his birthplace for three years, returning and graduating in 1893. He received a master's degree from the University of Michigan in 1894 and began teaching in Muskegon, Michigan.

The synod of the Christian Reformed Church called Rooks and Klaas Schoolland to be come professors in the literary curriculum of the Theological School, to which non-seminarians were admitted for the first time. Initially instruction was in Dutch, but in 1896 the first literary classes began to be taught in English.Two years later the process began to convert the literary curriculum into a conventional 2-year junior college program.

Rooks, continuing to teach classes, was named principal of this expanding curriculum, while the rector saw to the seminary curriculum. In 1904 the school was named in honor of John Calvin, and four years later the junior college curriculum was expanded into a three-year program. During Rooks's tenure the school acquired the land for the Franklin campus (1909) on which the main building was constructed 1916-17. In 1914, Rooks oversaw the beginning of the conversion of the three-year program into a full, four-year college curriculum.

In 1918 the Board of Trustees created the office of president. When Rev. John J. Hiemenga received that appointment, Rooks was named Dean of the College, but the student body continued to call him "Prexy." He retired from teaching in 1939 and as dean in 1942. Rooks studied for his doctorate in Europe but did not complete the requirements due to the deaths of his mentors.

He married Kate Corbijn (1871-1915) and they had two sons, Henry Corbijn Rooks and another who died in infancy. In 1916, he married Grace Oostining (1887-1967), they also had two children Rhinedale Rooks and Marius Rooks.